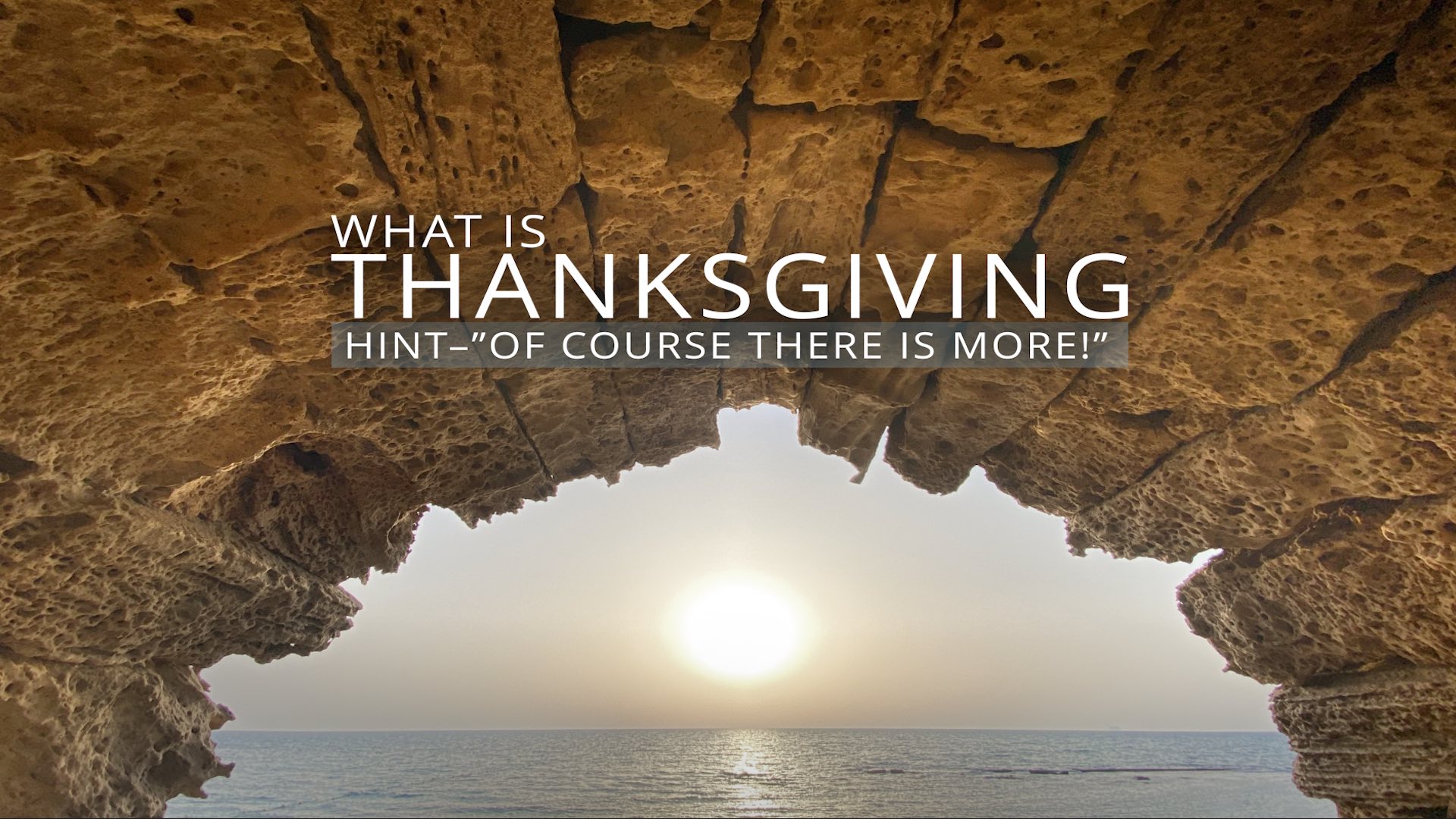 What is Thanksgiving Hint–of course, there is more!

On the fourth Thursday of November, the United States celebrates the official holiday known as Thanksgiving Day. Its “origin story” has reached near-legend status. In November of 1621, European settlers and indigenous people came together and celebrated a successful harvest with a three-day festival. Thanksgiving wasn’t an official holiday until 1863, when President Abraham Lincoln instituted it during the Civil War. In his proclamation, Lincoln called on Americans to ask God to “commend to his tender care all those who have become widows, orphans, mourners or sufferers in the lamentable civil strife” and to “heal the wounds of the nation.” The current (official) practice of gathering on the fourth Thursday of November began when President Roosevelt signed it into law in 1939 (aka “Franksgiving”).

But Thanksgiving is so much more than a holiday—it’s a lifestyle for Yeshua’s people!

And do not get drunk on wine, for that is recklessness. Instead, be filled with the Ruach, speaking to one another in psalms, hymns, and spiritual songs, singing and making music in your heart to the Lord—always giving thanks for everything to God the Father, in the name of the Lord Yeshua the Messiah. – Ephesians 5:18-20 (emphasis added)

Rejoice always,
pray constantly,
in everything give thanks;
for this is God’s will for you in Messiah Yeshua. – 1 Thessalonians 5:16-18 (emphasis added)

Being thankful when things are going well in our lives is one thing, but “always”? “In everything”? The Apostle (and Rabbi!) Paul gave clear directives to those early believing communities. He expected thanksgiving would be a constant among them, even when enduring challenges. Frankly, this seems a bit idealistic, don’t you think? How can believers be thankful all the time?

The Book of Job contains the Bible’s most infamous personal hardship and tribulation story. With Adonai’s permission, “the satan” attacked Job, killing his sons, daughters, servants, and livestock. Imagine losing everything all at once! Job was hardly in a position to launch into some praise choruses. But if we take some liberties with the text, that is (kind of) what he did.

Then Job got up, tore his robe, shaved his head, fell to the ground and worshiped. Then he said:

“Naked I came from my mother’s womb,
and naked I will return there.
Adonai gave and Adonai has taken away;
blessed be the Name of Adonai.” – Job 1:20-21

Job’s worship wasn’t religious or emotional hype. The fact that he referenced his birth reveals profound thoughtfulness at that moment. He was speaking from a place of perspective. Job knew that there was more to his story than the hardship of that moment.

There’s a moving story in the Talmud that expands this idea of perspective even further.

Like Job, this story describes the ability to endure hardship with joy because of a deep confidence and belief in at least two things: God’s goodness and His sovereignty. This connection between belief and perspective is wonderfully summarized in the words of Romans 8:28, “Now we know that all things work together for good for those who love God, who are called according to His purpose” (emphasis added). Or as another translation renders it, “everything that happens fits into a pattern for good” (Phillips). We should remember that Paul wrote that epistle to believers who were living in Rome under the rule of the evil, murderous Emperor Nero—not good times.

But in addition to what God does, our thanksgiving is anchored in Who He is!

We can be a relentlessly thankful people because we trust God to be ultimately good toward us. But in addition to what God does, our thanksgiving is anchored in Who He is! The opening line of Psalm 136 is,

Hodu L’Adonai Ki Tov, Ki L’olam Chasdo!
Give thanks to the LORD, for He is good, For His faithfulness is everlasting. (NASB)

Like many Hebrew words, hodu (“give thanks”) is based on a root word (yada) that means “to confess, praise, or give thanks.” Why is this hodu-yada connection significant? Because yada is the also the basis of the Yehudah—Jacob’s fourth son, commonly known as Judah. The Tribe of Judah produced Israel’s greatest king, David. And as we know, Yeshua is the “Son of David,” the “Lion of the Tribe of Judah.”

Thanksgiving and gratitude go hand-in-hand. The Hebrew term for gratitude is hakarat hatov— “recognizing the good.” Herein lies a secret that can help us walk in a lifestyle of thanksgiving. Gratitude doesn’t depend upon getting something good, but on recognizing the good you already have. Our capacity to recognize or see is directly related to our eyes. Of course, our physical eyes process material things, but Paul also mentioned the eyes of our heart which perceive the invisible. In Matthew 6, Yeshua contrasted the healthy/good eye with the unhealthy/bad eye—a significant concept in Jewish thought. When the Holy Spirit touches our “eyes” we can recognize the good, even in dreadful circumstances! This gratitude should overflow in thanksgiving.

If you’ve lost money in the stock market, but you still have your kids, you can be grateful.

If you’ve lost your job, but you still have your health, you can be grateful.

If you can’t move your legs, but you can move your arms, you can be grateful.

But of course, there’s more!

I love to explore the deeper meanings which await us as we study the numerical value of Hebrew words (we use letters to write numbers in Hebrew). The Hebrew expression for “Happy Thanksgiving” is Chag Hodayah which has the numerical value of 46. A couple of other key words share this value: letovah (“to thank”) and Elohai (“God”). Is there a higher or purer expression of gratitude during the “Thanksgiving” (46) holiday than “to thank” (46) our “God” (46) for His abundant goodness? This connection to “46” is only the beginning, however. Consider:

But of course, there is STILL more!

One of the greatest “good” things God has given us is Scripture. As you probably know, the Hebrew Bible was written in Hebrew and the New Testament was written in Greek. The Hebrew alphabet is comprised of 22 letters and Greek contains 24, which is a combined total of 46 letters. Additionally, each human cell consists of 23 pairs of chromosomes for a total of 46. Just like the chromosomes which are made-up of DNA—the building blocks of life—are connected to the number 46, so are the alphabets used to write Scripture for it is the spiritual building block of creation!

The number 46 also conveys the idea of being joined together. Physically, the union of 23 male chromosomes and 23 female chromosomes forms a new life. Biblically, God designated to Tribe of Levy for the priesthood in order to facilitate the unity of Israel. The Hebrew letters in Levy have the numerical value of 46 and it literally means “to be joined” or “to join together”!

Not only does the word of God join us to the Lord but so does thanksgiving and praise. It should be no surprise that the Hebrew expression, “and [people] will praise you” (ve-yooducha) adds up to 46. On “Thanksgiving” (46) it is important to take the time to recognize all the spiritual and material blessings that “God” (46) has given us and thank him “for the good” (46)!