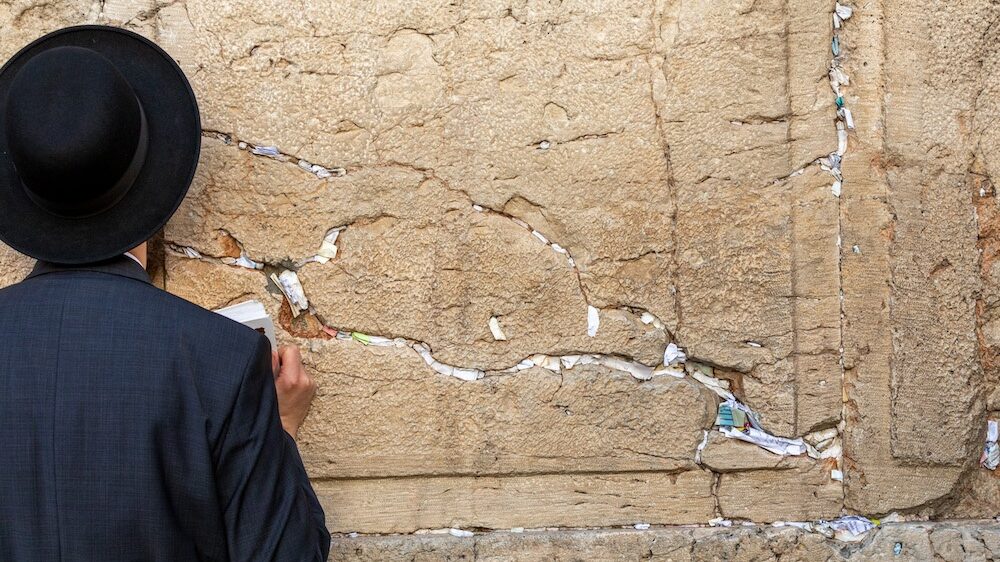 For the life of the body is in its blood.
I have given you the blood on the altar to purify you,
making you right with the Lord.
It is the blood, given in exchange for a life,
that makes purification possible.
Leviticus 17:11 nlt

The Jewish New Year, Rosh Hashanah, is followed by ten days of repentance and awe, culminating in Yom Kippur. Whereas Rosh Hashanah focuses on the repentance of the individual, Yom Kippur shares this focus and goes one giant step further: this holiday atones for the nation’s sins. Yom Kippur is called the Day of Atonement.

In the Old Testament on Yom Kippur, the Hebrews achieved forgiveness and atonement in the form of animal sacrifice. It was an exchange of life for life. This Day of Atonement was the single most hallowed day of the year when the Kohein HaGadol, the high priest, would enter into the Holy of Holies and say the sacred name of God. His focus and the focus of all Israel was on repentance and redemption.

Of the various Day of Atonement sacrifices, the most central was that of the two he-goats. They were to be equal in height, weight, and cost. Next, lots were cast to determine which he-goat would be sacrificed as a sin offering upon the altar to the Lord and which one would be designated as the scapegoat “for Azazel.”

The high priest laid his hands upon the head of the sacrificial goat in a gesture symbolizing the transference of sins from him, the nation’s representative, to the animal, who would bear the burden. The priest would then fasten a scarlet, woolen cord to the horns of the goat and tie a second scarlet cord to the entrance of the kodesh section of the temple. Next, the high priest would lay both hands upon the scapegoat again, reciting a confession of sin and prayer for forgiveness.

After all those present responded to this prayer, an individual was chosen, preferably a priest (kohen), to take the goat to the precipice in the wilderness, where the scapegoat would be thrown over a steep and jagged cliff, so that its body would be completely torn apart before it reached the bottom.

Once the sacrifice was complete, a supernatural phenomenon occurred. The red cords that were tied to the horns of the scapegoat and placed at the entrance of the Holy Place supernaturally turned from red to white to symbolize that although Israel’s sins were as crimson, God has washed them as white as snow (Isa. 1:18). When this occurred, it publicly bore testimony that Israel had been forgiven.

In Leviticus 17:11 God states that life is in the blood. Without the shedding of blood—in Jewish thought—there would be no remission of sin. God sent the Messiah to pay the interest and principal in full. The scapegoat represented the sins of the nation; Yom Kippur points to the ultimate redemption of the world, the fullness of redemption. A redemption is paid for, not by the blood of an animal, which still leaves a deficit, but by Yeshua’s blood, marking the debt PAID IN FULL.

AD 70, the scarlet cord stopped turning from red to white. This would be around the time of Jesus’ crucifixion and resurrection. This lack of color change is proof that the Yom Kippur sacrifices were no longer effective (Talmud, Tractate Yoma 39b). The he-goats offered by the high priest could not compare to Yeshua’s ultimate offering.

This is an excerpt from Rabbi Jason Sobel’s latest book, Aligning with God’s Appointed Times: Discover the Prophetic and Spiritual Meaning of the Biblical Holidays, available at FusionGlobal.org or on Amazon.com

1 From Harper’s Bible Dictionary, “A demonic figure to whom the sin-laden scapegoat was sent on the Day of Atonement (Lev. 16:8, 10, 26). The Hebrew word has been traditionally understood as a phrase meaning ‘the goat that escapes,’ giving us the word ‘scapegoat.’”

Aligning with God’s Appointed Times: Discover the Prophetic and Spiritual Meaning of the Biblical Holidays, we introduce ourselves to our faith’s Jewish roots and gain a heightened biblical perspective as we practice the same traditions and rituals Yeshua-Jesus embraced. We begin to see His life and ministry from a different viewpoint, through Jewish eyes.

Understanding and celebrating Jewish biblical holidays is transformational. We can ignite a fire that renews and transforms us as we combine Old Testament tradition with a fiery desire to go more deeply into the blessings God has for us and abide more deeply in Jesus Messiah.

Journey Deeper with me, Rabbi Jason Sobel, through Aligning with God’s Appointed Times: Discover the Prophetic and Spiritual Meaning of the Biblical Holidays.

"It was very uplifting and meaningful to me to watch and hear this preaching. It is one thing to intellectually understand the ideas behind "fusion" and quite another to witness how powerful bringing together the traditions can be in sharing the Word."