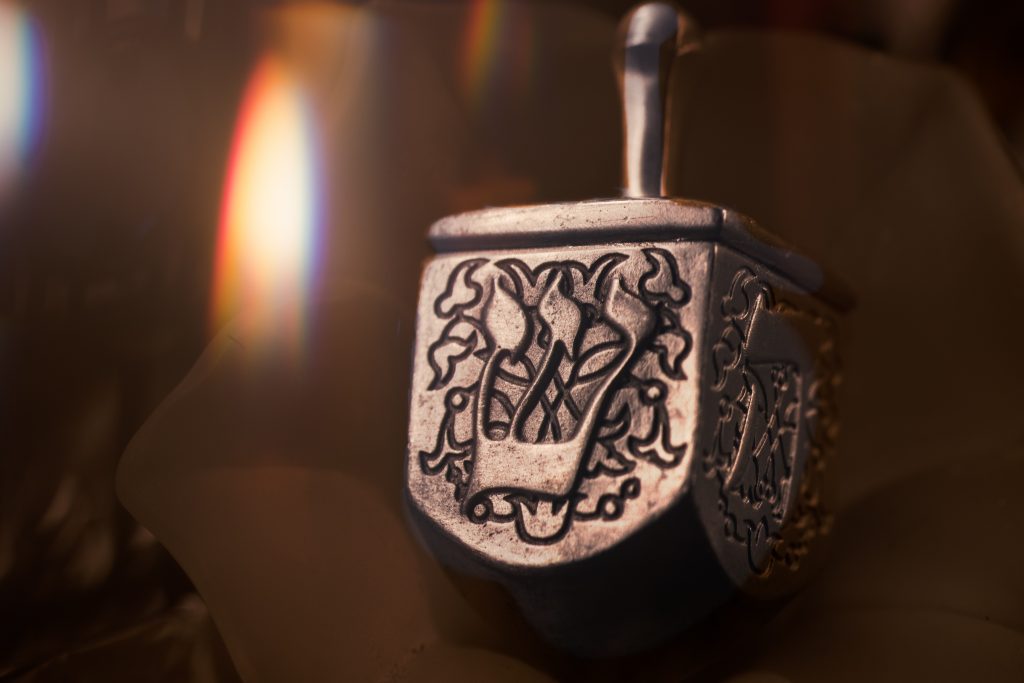 Once we understand that the focus of Hanukkah is re-dedicating ourselves to God, we can begin to go deeper and get a better picture of how to re-center our lives on the Messiah.

Let’s explore the Hebrew letters on the four sides of the dreidel, and how they also relate to the four basic dimensions of self:

The letter gimel refers to guf, which is the Hebrew word for the body.  It refers to the material part of man.

The letter nun refers to nefesh: the spirit and the soul. It is that aspect of us that allows the body to feel, to develop, and to grow—even as Yeshua did in wisdom and stature.

Then, there is the shin, which stands for mind and consciousness, an aspect of wisdom and common sense.

Finally, there is the heh, which in Hebrew stands for “all,” representing the transcendent part of the individual, which helps unite the other three.

Deeper still, there are four exiles of the Jewish people that, in Jewish thought, spiritually attacked the four different parts of the self. The Babylonians destroyed the First Temple and exiled the Jewish people from Jerusalem. The purpose of the Babylonian Exile was to extinguish the nun, the nefesh of God’s people. The nefesh is the spirit of God’s people. The Babylonians sought to annihilate the spiritual center of His people–the Temple in Jerusalem.

After the Babylonian Empire, the Persian Empire reigned in power.  This kingdom sought to destroy the gimel or self.  Who arose out of that kingdom?  Haman!  He tried to physically destroy the Jewish people by committing genocide.

After the Persian Exile, the Greeks ransacked the Jewish people with the goal to desecrate the shin, the mind, and consciousness. The Greek exile was a cultural attack on the intellect of God’s people.  They sought to indoctrinate them into a Hellenistic way of understanding the world and forbade the Jews to study Torah and to keep the mitzvot, the commandments. In Jewish thought, the mind and the heart are connected.  The Greeks wanted to change the way the Jews fundamentally saw the world, themselves, their culture, their traditions, and understood God.

The Roman Empire sought to attack all three, thus the heh. They destroyed the second Temple, ushering in an attack on the body, mind, and spirit of God’s people.  Every aspect was under siege.
There is an inherent link between physical exile and spiritual exile.  The chaos and disorder, the uprooting and upheaval of life as known, throw us off-axis, and we lose our center on the One.  Satan, Hebrew for enemy, seeks to distance and isolate us from God.

In fact, some of the main Hebrew terms for sin are connected to the concept of being misaligned.  Avon in Hebrew means being twisted or crooked.  The word “sin” in both Hebrew and Greek means missing the mark or falling short.  In other words, it is missing or distanced from the center.  The difference between exile and redemption is an issue of proximity.

How far are we from the Redeemer, who is our center? Remember the story when the rich, young ruler who came to Jesus and demanded, “What do I have to do to obtain eternal life?” Yeshua basically responded, “You are not far from the kingdom of God.” (Matthew 19:16).  Yeshua invites us into proximity—far or near. In Isaiah 57:19, He says, “Proclaim shalom shalom to those that are far and those that are near.”

If you are not drawing close to Messiah and if he is not the axis on which your life revolves, then it’s the world’s hand that is taking you for a spin and not the Lord’s!